The Death of a Salesman, the Birth of a...

August 15, 2017
I was proud of that first uniform.  Neatly attired from head to toe in navy blue with gold trim, topped by a baseball cap with the scout insignia, I was an optimistic eight year old cub setting foot in the neighborhood on a bright, sunny Saturday determined to lead my pack in thin mint sales.  Early that morning the neighbors on the block who knew the McCarley boy at least acted more than happy to purchase a box or two which could be had for four bits or so back in those days.  As I gravitated farther from the safe and known vicinity of the 2300 block of Stanley Ave, however, successful sales of the mints began to...thin.

The kinder rejections ranged from, "I promised my grandson I would buy from him this year," to "I already got some from a nice young man who came calling earlier."  Although cars were parked in driveways next to other houses and a passing glance revealed lights and televisions were on, several from those residences did not bother coming to the door.  Worse were some of the homes of unkempt yards, a bit creepy and rumored to be haunted.  There someone could answer the door with a steely glare asking, "What do you want?"

I began a count in my head as despondency grew.  Ten "no's" in a row.  Now 20 and upwards.  After the 31st house the lower lip began to quiver and tears welled up.  The still relatively full box of merchandise had gradually been wearing at its corner and bottom, a product of the continual removing and then repacking after a display of contents.   Without warning I stumbled on the sidewalk, dropped the container, splitting it, and spilled mints and boxes of mints all over the parkway and onto the street.  I then did what a lot of less than gallant and heroic adolescents would do--I sat down on the curb in front of that last house and fully cried my eyes out.

After a few minutes of sobs, I gathered my wits and had the wherewithal to slowly trudge home sans the box.  When I arrived my mother observed the swollen red eyes and empty hands and asked, "what's wrong?" and "where is your box?"  I uttered, "I hate sales,""I never want to be a salesman," etc. as I headed to my bedroom and slammed the door closed.

The moral of the story is that I never went into sales in my professional career and forevermore loathed asking others to buy or invest in something, often hearkening back to this childhood experience learning even then that I wasn't very good at it.  The lesson for now is that when leading clients on a discovery of career choices and opportunities we often reflect back on our strengths and weaknesses, likes and dislikes as youngsters.

I knew of a boy growing up who like me, mowed a few lawns during the summer here and there.  When his peers asked him what he was going to do after graduating from college, he responded, "mow some lawns."  While they secured their respective white collar jobs and mocked him under their breath he endeavored to build his business, which eventually became a multi-million dollar enterprise.

Though a little bit older, Debbie Fields was quite young when she began selling homemade chocolate cookies which ultimately grew into Mrs. Fields with now 390 locations across the US.  There was also a man who as a child sold his first drawing of a neighbor's horse.  Later as a struggling illustrator he invented a familiar mouse and eventually Walt Disney became a household name.

Oftentimes out of our despair comes opportunity.  Although the thin mint experience occurred more than 50 years ago why to this day do I still recall to this day how many times I was consecutively turned down?  I suppose I possess some innate element of recall and numerical sense.  Later, when reviewing baseball and other sports box scores prior to the days of electronic calculators if one wanted to determine an up to date average or statistic it often involved longhand division or multiplication.  Soon, when constant calculation grew wearisome, I just memorized the answers.  Later that parlayed itself into a part-time career in behind the scenes sports production; this year will be my 29th season of doing that.

Each of us has a special talent, skill, or ability.  Often it takes an objective encourager, such as a coach, to ask the right questions to lead us on a path of renewed self-discovery.  It would be my honor to help you in that process.  And, if your kids are selling popcorn, girl scout cookies, or thin mints, put me down for a purchase.

Popular posts from this blog

August 29, 2017
Years ago I was piddling around in the backyard and happened to eavesdrop on a conversation between my next door neighbor and another gentleman.  The discussion was about work:  tough, physical work.  "So and so was one helluva worker," said the one.  "Once I saw him carry two 80 pound bags of concrete mix from the truck to the job site, a distance of at least 200 yards one way without taking a break during a 10 hour day.  I'm guessing he must have made that trip at least 150 times that day and never complained."   The other responded along the lines of, "This gal worked the assembly line at the plant where I was employed.  She wouldn't take any guff from the people she worked around, but she always backed it up with the highest productivity scores of anyone in that section.  Every now and then management would bring in some hotshot piece of equipment, but I'll be damned that that woman did not continue to do the work as quick and with a higher rate
Read more 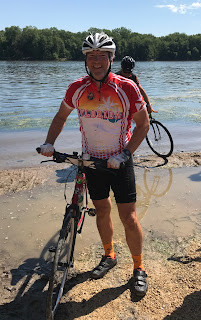 This past week marked the tenth rendition of my annual bike trek across the state of Iowa as provided by the Register's Annual Great Bike Ride Across Iowa (RAGBRAI).  Each of these journeys have given opportunity to enjoy the heartland of America up close through farm fields, grain elevators, small towns, and the people of this surprisingly diverse region.  The ride, which some might describe as "summer camp for adults," also provides "decompression" time, a chance to interact with fellow cyclists, have contemplative time alone, and visit somewhat obscure and out of the way landmarks.  Most importantly while I always find myself returning home physically exhausted and sun baked, mentally there is somewhat of a recharge, refocus, rejuvenation. The mind-body connection is remarkable.  If you are like me, I can recall days where I would sit at the desk for prolonged periods dumbfounded for the right words for a report or an appropriate solution or recommendation
Read more